BeLoveCurious Founder Helen is featured prominently in this Daily Mail You magazine article. Journalist Ruth Tierney focuses on women who are life coaches to their friends.

In the piece, friend Marsha explains how Helen gives her the support and advice to deal with her dating dilemmas. She describes Helen’s style as non-judgmental, warm and open and says it’s Helen’s own story of “having been there and done that in terms of bad relationships” and finally finding happiness that she finds most inspiring.

When asked what her most memorable moment was, Marsha explains “it was Helen calmly sipping her tea after I’d given her the nitty-gritty on my sex life“

When Marsha Derevianko, 26, a blogger from London, has a dating dilemma, the first person she turns to is friend and coach Helen Rice, 48. 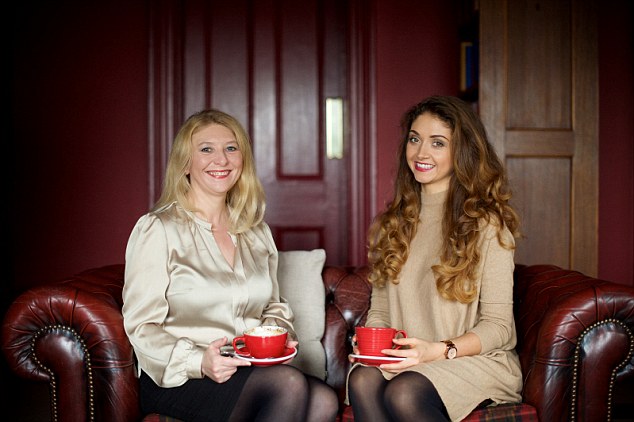 ‘Helen will be my friend – and mentor – for life,’ says Marsha (right)

Marsha Says: The first time I met Helen on a personal development course eight years ago, I instantly sensed she was the kind of person I could open up to. She is warm and trustworthy, with a big heart. We kept in touch after the course, meeting for coffee where we would chat about whoever I was dating in a light way.

But it was in 2014 that I first really sought Helen’s advice because I was feeling stuck in a long-term relationship. On the surface Robert seemed to be the perfect guy. He was adoring, generous, faithful – an old-fashioned gentleman. My friends loved him, my mum wanted me to marry him – but I was unhappy. There were no fireworks, no tingly feelings. On the other hand, he was a good friend and would make a brilliant husband and father one day. I broached my dilemma in passing with Helen and she offered to come round to discuss it in more depth.

Helen began coming over one evening a week. We’d curl up on the sofa with homemade brownies and I’d pour my soul out as Helen listened, only offering advice if I directly asked for it. She gets to the heart of what I’m saying, then reframes it back to me. It encourages me to reflect and to discover that I already have the answer within me. I can talk to her about anything – including sex – and she never judges.

I respect Helen’s opinion because I know her history: after years of failed relationships, she found her Mr Right three and a half years ago. They are best friends and clearly so in love, and seeing them together makes me think, ‘I want some of that.’ I wouldn’t trust the advice of a friend having one-night stands.

Helen said I deserved to love wholeheartedly and that I shouldn’t settle for comfort. But plucking up the courage to end my relationship with Robert took months of talks with Helen. She was always there for me, whatever time of day or night. I could forward his emails and ask her opinion, and even called her at midnight when I was stressing out about hurting him. Helen never made me feel like a burden, while other friends lost patience. 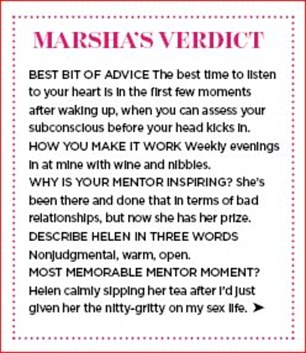 When I did finally break up with him last July, Helen was the first person I rang. As I cried down the phone, she told me that although it would hurt for a while, when Robert finds a woman to love him in the way he deserves, he will realise I did him a favour.

Helen advised me not to rush into another relationship. I took her advice, but I’m feeling ready to date again now. Our girly chats at mine have continued and Helen has helped me through the guilt and encouraged me to think about what I really want from the next man.

The fact that Helen is older than me is an advantage because we can have conversations of substance rather than bitching and gossiping. She will be my friend – and mentor – for life.

Helen Says:  When Marsha asked for my help last year, I initially worried that getting down and dirty rooting through her personal life as a therapist would affect our friendship. I was a research director when we met, but have since completed a Master’s Degree in Relationship Therapy, have a private practice in London and I’ve set up online love-life coaching business Belovecurious.com – so things have changed a lot since we became friends.

It’s not typically advisable to mentor a friend, but Marsha and I have a friendship forged through other personal development work we’ve done so it made this an easy choice. Marsha can talk for hours, but we can be quite straight with each other and get to the bottom of things because I know her so well. When she was worried that breaking up with Robert would hurt him, I offered a different perspective by asking how staying in the relationship would impact him.

I think the world is a better place if you are there for others. I feel privileged that people want to open up to me. My weekly chats with Marsha were instrumental in giving me the confidence to launch my coaching business last January, and I’m delighted that giving her my listening has allowed her own voice to come out, which is what it’s all about.